Globally, it showcases all that South Africa has to offer and, domestically, it is doing its bit to sustain local producers whilst challenging the status quo, something the Mandelas know a thing or two about.

“Our father and grandfather’s Xhosa name, Rolihlahla, literally translates as ‘the one who is brave enough to go and fetch the honey from the honeycomb’. Put simply, his name means ‘one who is brave enough to challenge the status quo’,” explains Tukwini, granddaughter of the late Nelson Mandela. With the help of her mother, Maki, she is fully intent on challenging the predominantly white- and male-dominated status quo of the current domestic winemaking sector.

Whilst the smattering of passionate female winemakers, like South Africa’s first female black winemaker, Ntsiki Biyela, are making positive strides in transforming the industry, there is so much more to be done, especially when you consider that only 20 or so of the 350, 000 people employed in the domestic wine industry are black winemakers and even less than that are black women. “The addition of black women in the South African wine industry is a serious challenge, but not an impossible one,” says Tukwini. “We have seen huge growth amongst the black middle class who are now experimenting with wines socially. We want to inspire and excite this generation to now join the industry in other ways than farm work. Whether taking on ownership as a black woman-owned wine farm or helping with the marketing of a well-established one – there is plenty of opportunity for black women.”

The ladies have certainly aligned the brand with its namesake, who gave them his seal of approval on his 95th birthday. Every bottle is drenched with symbolism of Mandela and his culture – from the Thembu Collection wine label inspired by the dashiki shirt print that he was most often pictured wearing to the dotted label on the sparkling wine that mirrors the decorative make-up worn by brides in Mandela’s culture. The brand also embodies a philosophy of corporate conscientiousness with a passion for creating and contributing to projects with a soul. As a result, there is no sprawling wine farm with large overheads and unsustainable aspirations, but, instead, the wonderful selection of wines is specifically sourced from local fair trade farms that mirror Mandela’s values of openness, warmth and family orientation.

In 2010, when the brand first launched, just over 17 million bottles of Fair Trade wine were drunk globally and two thirds of those were from South African farms, with half of the R18.4 million spent on Fair Trade products in South Africa generated by locally produced Fair Trade wines.

“We are committed to a positive and passionate contribution to society and, as a company, we have a great respect for the environment,” explains Tukwini. The wines are produced in an environmentally sensitive and ethically responsible manner in the world’s most beautiful, bio diverse winelands at farms such as Fariview, Citusdale and Du Toitskloof, the latter two of which have produced a Fair Trade range called the Thembu Collection. Inspired by the Thembu people, who had a deep appreciation of nature and their land, the six varietals in this range, including three red (Shiraz, Cabernet Sauvignon and Pinotage), are easy to drink and flavoursome.

Globally, South African wines continue to enjoy remarkable appeal, with over 400 million litres exported annually. Under the careful guidance of winemaker Erlank Eramus, House of Mandela is now producing a total of 16 different wines that are sold successfully to 13 overseas counties, including London, America, Canada and Chile, to name but a few. For the cynical who suggest that the ladies are simply capitalising on the advantages of the Mandela brand, Tukwini is quick to respond. “There is no better brand than the Mandela brand to promote South Africa INC and we cannot deny the fantastic exposure it generates in helping to present the best of South Africa and, if it helps bolster the local industry, then that cannot be a bad thing either.”

Not a profit-driven operation in the slightest, the wine brand supports the small farmer in a large way by offering a premium of the profits to the House of Mandela Family Foundation (HoMFF) as well as the Africa Rising Foundation, who help sponsor a selected number of students to study winemaking and viticulture. “Local consumers will be happy to know that, for every Fair Trade labelled bottle they buy, 50 cents goes back to the farm workers,” concludes Tukwini.

There is so much more to this brand than just the juice in the bottle. Steeped in a rich and famous history, culture and community, House of Mandela wine’s celebrate the past by giving the South African wine sector the international recognition it deserves whilst looking forward to the future and opening the sector to a whole new demographic. 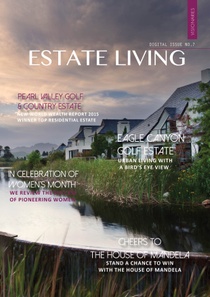